Robotic exoskeletons that can help paraplegics leave their wheelchairs.  After six years in a wheelchair, Tamara Mena can walk again.

Tamara Mena was 19 years old when she dismissed all hope of ever walking again. Mena was living in San Diego and working toward a degree in hotel management when she and her boyfriend Patrick decided to hit the clubs in Rosarito Beach, just across the Mexican border. Since they didn’t want to risk drinking and driving, they took a cab. They never made it to Mexico.

About 2 miles from their destination, their vehicle slammed into a horse. The impact launched the animal into the air; it landed on top of the cab, crushed the roof to seat level, and killed Patrick and the driver instantly. Mena was paralyzed from the mid-chest down.

“I wanted to walk,” she says. Graced with tawny hair, high cheekbones, and chocolate-brown eyes, Mena, now 25, is a picture of youthful vitality if you overlook the tracheotomy scar where medics inserted a tube to oxygenate her collapsed lungs after the accident. “I looked into walking with braces, but they sucked the energy right out of me. I met with a doctor about stem-cell treatments, but that was costly and there was no guarantee. I gave up. I had to move on.” 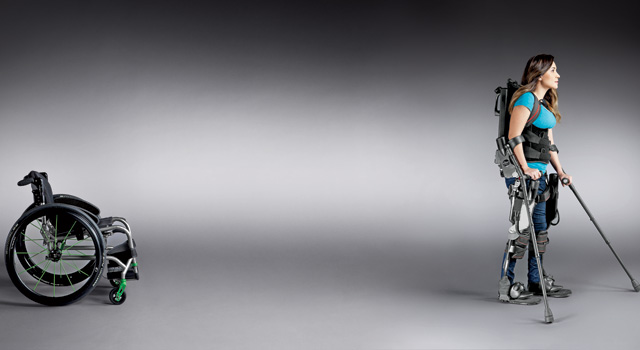 Past the cramped reception area (which doubles as a customer-service bullpen), its Santa’s robotics workshop. The 12,000-square-foot floor is a labyrinth of workbenches, storage bins, and whiteboards covered with electrical diagrams. A yellow gantry–basically a 35-foot girder on trestles–cuts across the floor to protect test pilots like Mena against falling.

A fully assembled hangs on a rack next to one of the benches, its legs pumping repetitively in test mode. Even without an upper body, it looks shockingly human. Its architecture matches the familiar anatomy of legs and hips; its black aluminum frame (adjustable to wearers of different heights) mimics the bones, its gently whirring electrical motors, the muscles. Its gait falls between a leisurely stroll and a military step as it marches toward the marketplace.

The dream of a wearable robot capable of overcoming the frailties of human anatomy dates back at least to March 1963, when Marvel Comics published its first issue devoted to Anthony Edward “Tony” Stark, a millionaire industrialist who donned a mechanized suit to become the Invincible Iron Man. The U.S. military was thinking along the same line, and six months later, Army engineer Serge J. Zaroodny published a paper entitled “Bumpusher: A Powered Aid to Locomotion.”

At Vanderbilt University, roboticist Michael Goldfarb has taken advantage of newer batteries, motors, sensors, and manufacturing methods to build a lighter, potentially cheaper exoskeleton that snaps apart to fit in a knapsack. The unit integrates electrical stimulation, prompting leg muscles to contract by applying minute jolts to the wearer’s skin. Goldfarb expects to sign a licensing deal with a major manufacturer as early as this summer. His unit has gotten rave reviews from therapists and patients, but it’s relatively unknown.